Endemic species of the Galapagos

(For a specieslist with photos, check the lower part of this article)

Again something about Observado.org, this website likes to complete the overview of all the species of the World. Including the Galapagos. Have a look at the specieslist already entered on observado.org (change language to english in the top right corner):
Specieslist
or at the pictures (change the dates between which dates you like to search!):
Photos of species from the Galapagos
I have never been tot the Galapagos archipelago. Off course this is a big wish, but at the moment it's probably not going to happen. But if someone out there likes to sponsor me.... ;-)
Why, if I have never been there, would I talk about the Galapagos?
Let me tell you.
Again the admin for Observado.org story?
Yes!
As a volunteer admin I check almost daily the newly added pictures on observado.org. One of my personal goals is to complete family overviews like these ones (change language to english in the top right corner):
http://observado.org/familie/view/113
or these:
http://observado.org/soort/info/363
I can only complete these overviews with the help of as many observers as possible, that like to share their observations on observado.org. At the moment the site is growing really fast and I am learning so much on observations of others. About subspecies, about ageing of birds, but also about there geographical spatiation. That's the main reason why I like it so much if we would get these overviews filled. One of the interesting phenomena are Island endemics. One of the most famous areas on this topic is off course the Galapagos archipelago. Recently some nice pictures were added by Marc Gottenbos. It makes me dream of nice places on bad wheater winter days...
But also many, many other observers added fantastic photos, just to mention a few that added recently some nice ones:
http://observado.org/user/photos/20175
http://observado.org/user/photos/8538
http://www.natureview.nl/
http://www.ltdphoto.com/
But every picture, even bad quality is great, since it will give extra insight into the biodiversity of the world! So thanks to all observers!!
Before it's getting t0o much a commercial, here are some tips to some good sites about the Galapagos:
If you want to know more on the Galapagos, check these sites:
Photos (photo overview of the species of the archipelago)
http://observado.org/gebied/species_list/36231 (exact locations where birds were seen, and add your own observations)
http://avibase.bsc-eoc.org/checklist.jsp?region=ECga (Avibase, complete checklist)
and
http://www.travellingbirder.com/birdwatching/birding_Galapagos.php?from=1&to=12 (tripreports)
http://en.wikipedia.org/wiki/Gal%C3%A1pagos_Islands (Good old wikipedia)
Endemic Bird species
(Some pictures of these species are still missing. If you have these pictures, please don't hesitate to contribute on observado.org):
Galapagos Penguin
Flightless Cormorant
Swallow-tailed Gull
Lava Gull
Galapagos Hawk
Galapagos Dove
Galapagos Flycatcher
Lava Heron
Galapagos Mockingbird
Charles Mockingbird
Hood Mockingbird
San Christobal Mockingbird
Large Ground Finch
Medium Ground Finch
Small Ground Finch
Common Cactus Finch
Large Cactus Finch
Vegetarian Finch
Large Tree Finch
Medium Tree Finch
Small Tree Finch
Woodpecker Finch
Mangrove Finch
Green Warbler Finch
Grey Warbler Finch
Sharp-beaked Ground Finch
Galapagos Crake
Near endemics:
Waved Albatros
Galapagos Petrel (a.k.a. Dark-rumped Petrel)
(to be continued)
Gepost door wouter op 11:38 42 opmerkingen:

I am a volunteer admin for the Biodiversity website http://observado.org. I am still very excited about the project, so let me tell you something about it. I will start with it's history and then I will explain you something on how it works (please scroll down if you're not interested in it's history). Observado.org is a spin-off project of the very succesfull dutch website http://waarneming.nl. The project started in August 2003, with a question on the EBNNL (eurobirdnet Netherlands) internetforum. The question was about how to get information on what birds were seen in which Dutch nature reserves. If you wanted to visit an area, what could you expect? In August 2003, on EBNNL it was proposed tot create a national database, where you could enter, retrieve and share sightings of birds. The database should be easy to use and had to be open to everybody, from laymen to experts. Founding fathers Hisko de Vries and Dylan Verheul teamed up with the foundation "Stichting Natuurinformatie"and together they built Waarneming.nl. (I joined in the winter of 2005/ 2006 as volunteer when I organised a national count of Waxwings, during a large irruption of this species in Western Europe. We used Waarneming.nl as the platform where people could enter their waxwing sightings).
Growth went fast and by 2005 it was clear that birds weren't the only thing, users were interested in. So other groups were added. Mammals, amphibians, ... I myself entered the first Fungus sighting, plants, etc.. The possibility of entering pictures and sounds were improved as was the way you could enter a sighting. With the use of google maps, it became possible to point on a satellite map, where exactly you did the sighting. This was off course phenomenal and improved the distribution maps enormously! Sightings are checked by experts, called admins or validators. Within 5 years time, the distribution maps on Waarneming.nl, were often better than the ones that were gathered in the 20 years before. It appeared that single sightings could give a lot of information, something probably not many people had expected.
Enough about Waarneming.nl, let's talk about Observado.org!
The dutch observers didn't only see animals/ plants/ ... within the Netherlands, they also visited countries abroad. They wanted to have a platform where they could enter and share these sightings. Since they were already using waarneming.nl, why shouldn't there be an international version?
Observado.org is open to everybody from all over the world, so not only for Dutch users. So whether you're from Spain, Brazil, Japan, South-Africa or whatever country, you could all join and share your biodiversity observations! Every observation is interesting, so not only the rare species! The large amount of pictures and sightings will give information on the variation within species, will improve the distribution maps and can help people to identify species.
So what does it look like and what could you do with it?
First of all, change language to english in the top right corner when you open Observado.org. Secondly you could always have a look at the observations that are already in the database, also without signing in. But if you want to enter your own observations you have to log in. Signing up is free. The reason why observado asks for signing in, is to keep the data clean of errors and nonsense observations. If we (admins) find an error or a strange observation, we can contact the observer and ask him/ her to change or delete the observation.
If you do decide to enter observations on Observado.org, there's many extra's you could use (like keeping your own lifelists, search in your own photostream, enter sound recordings, etc. etc.).
Now on tour!
(I give some links, best is to right click on them and open them in a new tab).
startpage This page shows recent rarities added from all over the world

On top of this page, you'll find the menu tabs (under "Observado.org"):

In the search bar, you could search for specific species. Make sure you enter the correct speciesname (or part of the speciesname) otherwhise it won't find the species you are looking for. Let's start searching for the global species Osprey:
Enter osprey in the search bar, and you'll retrieve:
http://observado.org/search.php?q=osprey&x=0&y=0
Two species, let's take osprey:
Click on the speciesname and you'll get all the osprey sightings in Observado.org:
http://observado.org/soort/view/346 (from a chosen date, till a chosen dat).
(if you look at province, you could chose a country)
Okay, let's say we're interested in pictures of this species. If you look in the menu top right "about this species", you see "photos"
http://observado.org/soort/photos/346
Also have a look at "information"! Information is a selection of the pictures, with focus on identification and variation.
My own sighting of an osprey (I didn't include the google map):
http://observado.org/waarneming/view/40159837?lang=en&local=xx 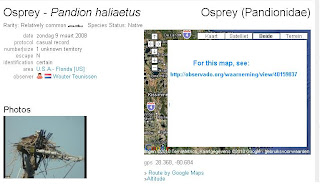 Try also clicking on the familiy name of a species! This will show you the other family members.
Just try things out by clicking on them! That's the best way to find out how it works! I might write some more about this in the future.
Good luck!
Wouter
Gepost door wouter op 00:48 Geen opmerkingen: