Sorry for my low output lately. I just couldn't make time to write and also lost a bit of interest in writing (June is always a bit of a quiet period for birds in the Netherlands). But things changed completely yesterday!
My friends (Luuk, Frank and Ben) called me to go birding in the province of Noord-Holland. Their main goal was to try to get a view of a Balearic shearwater Puffinus mauretanicus. Problem with Balearic Shearwaters is, it takes hours and hours of watching over an empty sea to get a short glimpse of this bird. The species is really hard to get in the Netherlands. Not really promissing, certainly not when the weatherforecasts were also not really nice. I had plans visiting some Musea and said no to them. After an hour, fear took over me. Ben was quite convincing, Lucky Luuk was part of the team and although early in season it was the right time of the year: Saturdaymorning 5.20 a.m. I stepped in Luuk's car to visit Camperduin (the best place to see this species in the Netherlands!). On the way, clouds became darker and darker and there was heavy rain. When we arrived at the spot, there was no way we would go and watch this empty sea for hours in the rain. We decided to change plans and visit a sad grounded Eurasion Griffon Vulture in Wieringen. (our luck with the Balearic Shearwater would change later that day, please read on!)

The Eurasian Griffon Vulture Gyps fulvus, was discovered two days before. Probably due to the bad weather the bird had stayed here. Vultures need thermal vents to fly without using too much energy. It was a sad sight, the bird didn't move at all and looked more like a beheaded stuffed bird than a large fearcefull scavenger. A bit boring, but it was at least something. 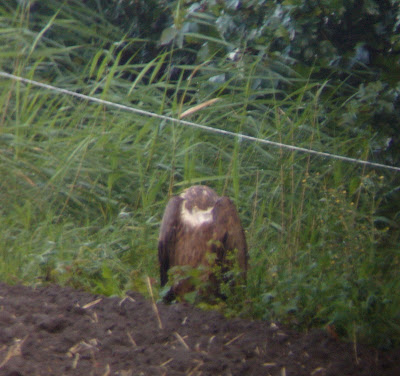 The wheather changed a bit and things looked more promising. We went to Den Oever, where a few White-winged terns had been seen lately. There were loads of beautiful Black terns (it's closest relative). They were foraging in flocks, have a look at Luuk's weblog to see a picture of the Black terns: http://vogelverslagen.web-log.nl/mijn_weblog/2008/07/vaal.html
We didn't see the White-winged terns, however. 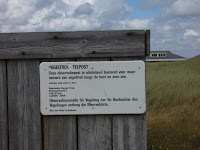 We visited some more bird areas (Saw a nice juvenile Little owl and some breeding plumage Sanderlings) and then we decided to have another try at Camperduin. There's a hut (without a roof though...) built as migration point where we settled ourselves. Within half an hour we were succesful! Incredible, I discovered the bird at really close distance, only about 150m away. We had splendid views, better than this you probably won't see a Balearic Shearwaters in the Netherlands. We followed the bird until we lost it behind the dike. We just couldn't believe it and we were really happy with this sighting.
To read something about their identification: http://www.noc.soton.ac.uk/gg/SWSW/id_guide.html (sroll down to the Balearic Shearwater identification article)
The hide: 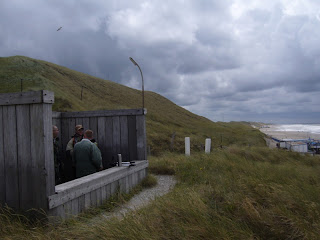 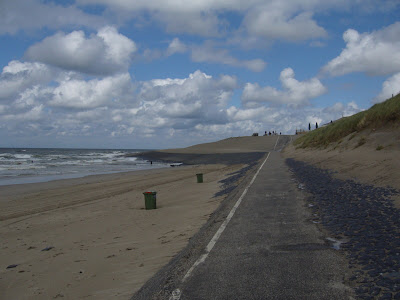 As I already said, Balearic Shearwaters are really hard to see in the Netherlands. The only place where you probably have a reasonable chance to see one is Camperduin. But only if you are willing to put time and effort into it. There's another thing, which makes it more complicated to see one: Balearic Shearwaters are rare on worldscale, and they become rarer and rarer everyday! The total population is probably about 2000 breeding pairs, they breed on the Baleares (Mallorca, Minorca, Ibiza, Formentera and Cabrera). Predation by feral cats and rats takes a large toll at the breeding grounds. After breeding the birds leave the Mediterranean Sea and forage in the Atlantic. Adult mortality is also unusually high, probably due to long line fishing. The birds live close to the shores, closer than other close relatives. They have learned to follow fishingships to profit from fish discards, but with long-line fishing this trait is not very profitable to the birds... Read this interesting article to get a better insight into the problems Balearic Shearwaters are facing: http://bycatch.env.duke.edu/species/balearic-shearwater
If things aren't changed the bird might go extinct within 40 years!
Although the birds become rarer, chances of seeing one in the Netherlands might paradoxically increase. The birds are actually cold water specialists. The cold waters are much more productive in food for the Balearic Shearwaters than the warm parts of the oceans. Since the temperature in the oceans is increasing due to Global Warming, the birds have to travel further north to get their food: http://www.birdlife.org/news/news/2006/09/balearic_shearwater.html
See also:
http://www.bbc.co.uk/devon/content/articles/2006/09/20/balearic_shearwater_feature.shtml
But things are probably more complicated than this and a lot of research is still needed:
http://rom.ex.ac.uk/documents/Bios/sb312/Votier%20et%20al.%202008%20Biology%20Letters.pdf
For more overall information and some pictures:
http://www.birdguides.com/species/species.asp?sp=011074
and:
http://en.wikipedia.org/wiki/Balearic_Shearwater
Gepost door wouter op 01:43