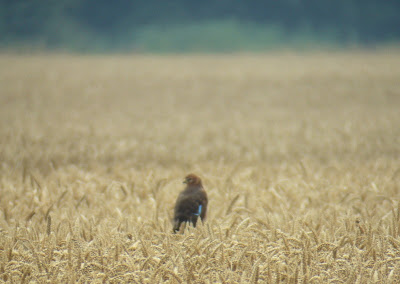 In the North-east part of the Dutch province of Groningen is a small stronghold of a magnificent species: the Montagu's Harrier Circus pygargus. These harriers were quite common in the nineteenth century, but the habitats it inhabited (open dunes, moorland, reedbeds) changed and got apparently useless for the harriers. Above the changing landscapes came the DDT problems. Montagu's harriers feed on rodents and large insects, and the use of DDT as an insecticide took its toll on the harrier population. Apart from the accumulation of poisoness chemicals there were also no large insects left. The numbers of Montagu's Harriers declined in the Netherlands and by 1987 there were only 3 pairs left. Things didn't look very promissing. 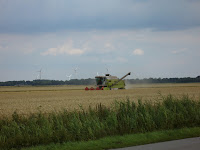 By 1990, when everybody probably gave up on the Montagu's Harrier as a Dutch breeding bird, things changed unexpectedly. In that year the European Union decided to no longer subsidize the wheatfarmers in order to get rid of the surplus of wheat and to get a better and more natural wheatprize. Instead of subsidizing the farmers for their production they subsidized the farmers when they took agricultural land out of production. Since the wheatprizes were so low, the farmers could better set-aside some of their land and benefit from the European money. Unexpectedly this set-aside agricultural land, had an amazing side effect. Many species that were having difficulty in surviving in the barren Dutch agricultural landscapes, florished in this newly created mozaic. Two species that were never seen before breeding in agricultural land started to breed in the Oldambt area. One was the Corncrake and the other was the Montagu's Harrier. The area became some kind of surrogate Steppe area. But because this was off course still agricultural land, the birds needed some kind of extra protection. In order to provide the birds with this protection, a Foundation was created: Stichting Werkgroep Grauwe Kiekendief. They were succesful, numbers increased to about 40 breeding pairs, last year! the project co-operates closely with its German counterpart.

The project is really nice. Everybody seems to co-operate, from politicians, to farmers, to volunteers and to scientists. The birds are ringed, wing tagged and some receive a satellite device. The volunteers build nest-protectors and the farmers don't harm the nests. In order to keep people involved, they name some of the satellite birds after the farmers or the volunteers. The project gathered a massive amount of information about these beautiful birds. Read all about them on the website of the foundation: http://grauwekiekendief.nl/index_eng.php

The satellite tracked birds gave us more insight into their lives, especially during the time they were on migration into Africa. It all started with two females Marion and Beatriz. Read here about their sad but fascinating stories. Every satellite bird tells his or her own story, which makes it really personal and very interesting, more birds got a satellite device and I can advise you to read their stories as well. If this got your interest, there are more projects concerned with satellite telemetry of Montagu's harriers: http://malimbus.free.fr/trakindx.htm
My friend Vincent van der Spek, joined the project for an internship. He invited me and some other friends to help him with his project. It was mutual benefit, since we would be able to enjoy the Montagu's harriers and he would have some company and a car to drive him around. I'm still very thankful, since the two days I was able to visit him, were absolutely fantastic. And especially the first day, was one of the best Birding experiences I ever had. 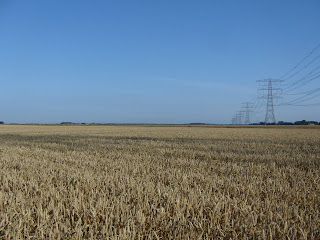 One of the nesting sites 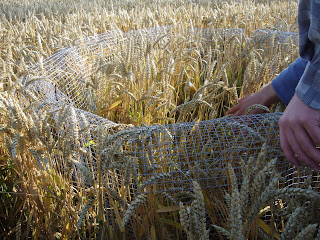 Vincent showed us that the Montagu's Harrier is colony breeder. Don't think of a colony like that of herons, but think of a couple of nests in the same wheatfield a couple of hundred metres apart. All kinds of interesting facts were told and seen in the field. We saw the adult males bringing food to the nests and females co-operatively chasing away a Marsh Harrier. What beautiful and elegant birds! We heard their calls, saw a young and tagged bird and enjoyed the landscape. Then when our survey time was over, Vincent had another surprise.
There was a nest to be ringed that afternoon and we were allowed to be present. Wow! That was a great wish. It was just as I hoped it would be. We measured, ringed and wingtagged 3 birds. Have a look at the pictures (from both days) and you probably know how I felt. 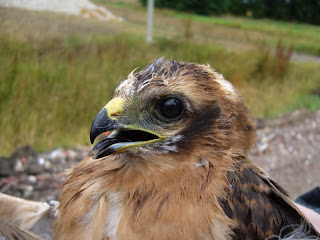 female of the second day. 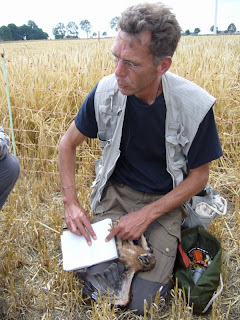 The day wasn't over yet. There was a good wader area called Polder Breebaart. A few days before, there was a sighting of two Broad-billed Sandpipers and a Marsh Sandpiper. We (Ben Wielstra, Luuk Punt, Vincent van der Spek and me) had already been there in the afternoon, but then things weren't really promissing. When we returned in the evening, with the right tide, things were completely different, there were many, many birds. At least a thousand Dunlins and a couple of hundred Spotted Redshanks. We scanned the area and saw a few Curlew Sandpipers in breeding plumage, a few Red Knots and then Ben discovered a Broad-billed Sandpiper. We didn't have much time to enjoy watching it, because Vincent discovered an odd looking Golden Plover. It was indeed odd and after an identification discussion (small bird, long-legged impression, dark undertail coverts, barring on the sides, yes, ...dark underwings, ...) we agreed it was a Pacific Golden Plover! A bird that can look much the same as an American Golden Plover, with which it was considered conspecific in the past and as a Golden Plover, so we had to be careful with the ID. But everything was alright for this species. What a discovery and what a day!! 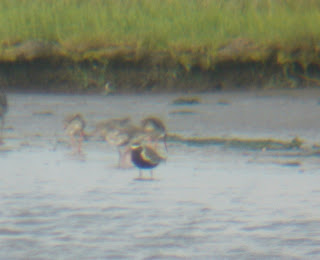 The second day I was with Kasper Hendriks, Rob van Bemmelen and Maarten Verrips. We weren't as lucky as the first day, but this was also a very nice day. We could join two ringing sessions of two different nests. But this time much more people were present. A nice thing was that the proud farmer was also invited. The wader area was however less succesful. We weren't there with the right tide, which did matter! I did see about 75 Common seals and a couple of thousand Common Shelducks, which was also nice. 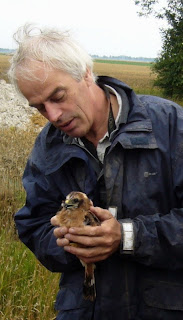 The farmer, who owned the land where this bird hatched. 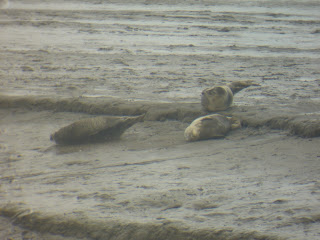 Common Seals at the Dollard.

The Montagu's harriers might be under pressure again. This year, for the first time in 18 years, there were hardly any lands set-aside. The European Union stopped subsidizing this out of production taking, since there is a shortage of wheat and other agricultural food products on the world market. This year will therefore be a very important year for the harriers. How will they cope with this change of land use? Will they be able to get enough food? And will they be able to adapt? Please contact the foundation if you like to support them! 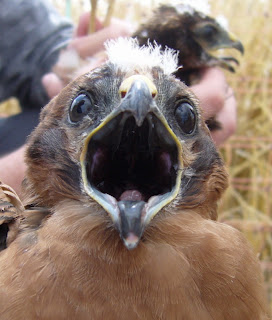 Great action! We protect Circus pygargus too. Here are the photos of the conservation of the species in Silesia in Poland.
http://dzialprzyrody.blogspot.com/2014/04/pomyslna-ochrona-legow-botniaka-akowego.html