Tiengemeten, Kinderdijk and other bird areas - Views in the past and in the future. 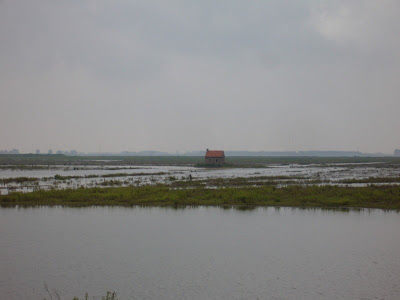 Yesterday we left for Tiengemeten: a small isle in the province of Zuid Holland. None of us (Luuk, Frank, Ben and me) had ever been there, but we had heard some good reports of other birdwatchers about this place. Tiengemeten is an island in the Haringvliet. It is the last true island that is left of the Dutch Delta (a large delta where several large rivers end in the Northsea), all the other islands of the Delta are connected by bridges to the mainland nowadays. If you want to read more about the history of the island, read this nice and very readable report: http://islas.ruudbijlsma.nl/tgm_en.htm 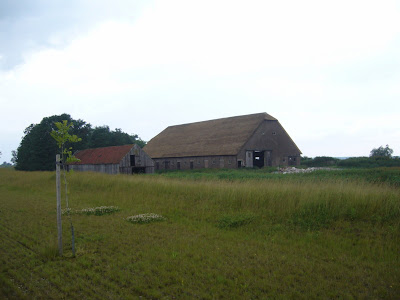 Tiengemeten was bought by Natuurmonumenten (an organisation concerned with nature conservation) with aid of the Dutch Government. The main idea was to create a Nature island, with some low-profile recreation. (A fantastic choice since there were all kinds of plans with the island in the past, like the creation of a nuclair power plant or plans for a second airport for the city of Rotterdam). The new plans are immense. Not only is the entire area large (the total surface of the island and the area outside the dikes is over 1000 hectares), the plan also includes to break open some of the dikes, to relocate all inhabitants (the last farmer left in 2006) and in the future there are also plans to get back the tidal movements of the sea by periodically opening the sluices of the Haringvlietdam. This will mean the water will also become brackish again. We only visited the North-east part of the island. There was a strange historic atmosphere with the abandoned houses still present. The fields were gone, the ground lowered and a large part was inundated. The inundated fields were full of birds: about 50 Spoonbills, 30 Little egrets, 4 Black-necked Grebes, 1 summer plumage Dunlin, 4 Grey Plovers, about 10 Mediterranean Gulls, 12 Little Gulls (we even heard them calling), over 500 Black-tailed Godwits (not a good sign, these birds probably lost their nests), numerous Redshanks and several species of ducks. 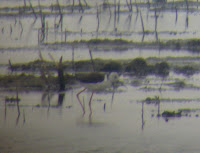 But the 15 Black-winged Stilts Himantopus himantopus were the best treat of this island. Black-winged Stilts are rare in the Netherlands, to see 15 birds is even rarer. The birds were breeding, we saw at least 4 nests! Then we had to quit our visit, a heavy thunderstorm and rain came closer and closer and we decided it would be safer to leave the open fields and return to the visitors centre. 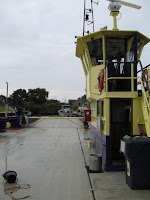 We took the little ferry and returned to our car.


In the meantime the weather had improved and we decided to continue our trip. We tried the Scherpenissepolder. A Marsh Sandpiper had been reported and we quickly found the bird. Areas like the Schakerloopolder, Het Stinkgat, Krammersluizen were visited. Het Stinkgat looked nice when we arrived. There were some waders present near the viewing point, but when we walked towards it, a group of bored cows decided to bully our day. They decided to take a walk and scare away the birds... On the right, in the picture you can still see the flock of birds flying off... 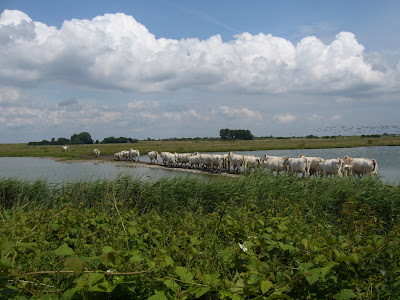 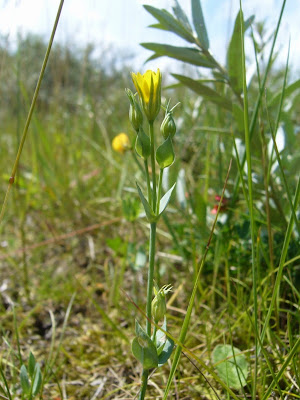 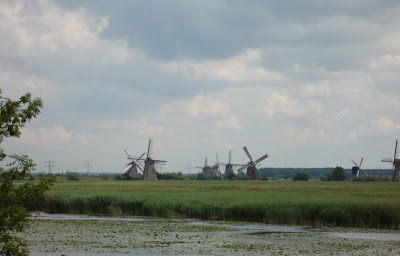 Our last destinastion of today was Kinderdijk. Kinderdijk got worldfame by it's Dutch mills, but also have a look at the way it got its name (it's a nice legend!). Nowadays these mills are UNESCO world heritage. It's the only place in the world where you can see so many of these types of mills together and it therefore attracts many visitors from all over the globe. To help you out of your dreams: Holland is not full of tulips, we don't walk on wooden shoes and most of the old windmills have already vanished long ago. Nevertheless the mills and hydraulic systems are an important part of our history and it is a good thing this site got on the UNESCO list. I had never been to Kinderdijk before and I must say, I was impressed by the view of so many old windmills. We stood between two newly built houses next to a busy road and looked over the fields towards the mills. It was like watching through a keyhole into the past.

Our goal was not the mills though. A white-winged tern Chlidonias leucopterus had been reported on the ponds right behind the houses. The pond was filled with floating leaves of Yellow Water-lily Nuphar lutea and on these floating leaves there were nests of the closely related Black Tern Chlidonias niger. Black Terns breed in small colonies and prefer to breed on floating plants in fresh water marshes. Sometimes they breed on man-made small rafts, specially created for this species. In winter they stay in large flocks at sea in Western Africa. The numbers of Black Terns decline. In the breeding atlas "Teixeira R.M. 1979. Atlas van de Nederlandse Broedvogels. Pp. 182-183. Natuurmonumenten, 's Graveland" a couple of reasons are hypothesized: Most important reasons are probably the fact that marsh areas and agricultural grassfields were drained and waterlevels were lowered. Other reasons probably are the strong decline of the plant Water Soldier Stratiotes aloides, the decline of large insects, and increased watertourism. I can understand the watertourism problem; when we arrived there were two people fishing, their boat was very close to a nest of a black tern. The fisherman probably weren't even aware of it. The nests are not strong at all and a large wave would probably make it sink...
Just immediately after we parked the car, we saw the White-winged Tern. We were very lucky, since 2 minutes later a Marsh harrier (a bird of prey) arrived. All the terns were alarming and trying to get the harrier away from their nests. The White-winged Tern joined the other terns. But then when the Harrier flew off, so did the White-winged Tern without any obvious reason. We waited for about half an hour (and enjoyed the still present Black terns), but the White-winged didn't return. We decided to leave it, and went home.
Gepost door wouter op 00:58