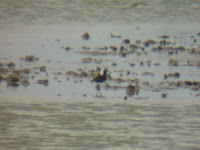 A lifer is a bird species you see for the first time in your life (actually, it doesn't have to be a bird, it could also be a mammal, a fish, a plant, or any other biological taxon). Some people will call it a tick on the lifelist.
That's easy, right? ...No, it isn't! Most birdwatchers make things a bit more complicated. For instance a bird can only be counted as a lifer if it is a wild one. So sorry folks, zoo-animals don't count, nor do escapes. But what about introduced species that manage themselves for many years (like the Pheasant in Western Europe), or reintroduced species (like the Raven in the Netherlands)? What would you do with them?

Things can become even crazier, there are rarity committees who examen your rare sightings. In the Netherlands you have the CDNA (Commissie Dwaalgasten Nederlandse Avifauna). In their minds (and in the minds of many other birders) you can only officially "tick" a rare species if the committee has accepted the sighting. The whole idea behind it, is off course to better document rarities and to exclude obvious mistakes, but for many birders it looks more like a game of getting a new tick on their list. Discussions wheter the committee should accept or reject a bird can be very long and very funny. Famous discussions (only in Dutch) were about a Green heron (more than 600 reactions and over 35000 views!) and about a Canvasback (More than 500 reactions and over 30000 views!).

And then above all you've got the fundamentalists who are even stricter than the committees: I've got some friends who don't count a bird when they've only heard it. So no Baillon's Crake Porzana pusilla for them...even though they are absolutely sure that's what they've heard.
I am a bit in between all this. For me the list itself is not that important. But I do like to remember what I've seen and when I've seen it. I only count birds on my own list if I'm definately sure about the identification. And if I'm sure about a sound I will count it. 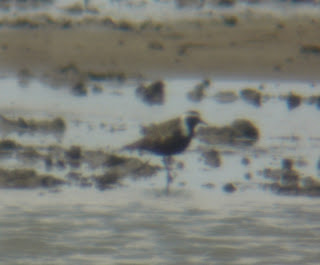 We (the same guys with whom I visited the Red-footed falcons yesterday) almost missed the bird. When we arrived the bird had just flown away. We drove around and scanned the surroundings but couldn't find it. In the end we decided to return to the place where it was last sighted... and there it was! It was a beautiful male in summerplumage and for me, Ben and Luuk a lifer!
Gepost door wouter op 07:43