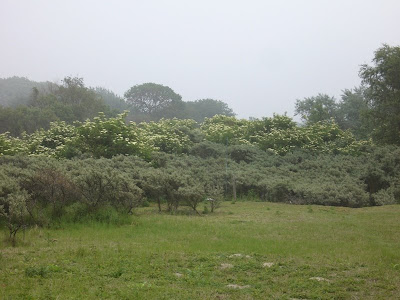 CES, or Constant Effort Site is a specific method of bird ringing. The idea is to monitor birds over a long period of time, with standardized methods. If you keep record of the age and sex of the birds and if you also record recaptures (i.e. when you catch a bird, that you've already ringed before), you are able to tell something about the demography of the birds in your area. The ratio of adult and juvenile birds give an impression of productivity, the recaptures tell you something about survival and site fidelity. Off course the power of your reasearch is in numbers. Not only the numbers on your own location but also the numbers of the hundreds of other CES ringing locations in Europe. This large dataset could be a powerfull tool for monitoring population changes. I'm not going into more details about the CES methods and guidelines. If you want to read more about these things, please read the EURING guidelines for CES ringing in Europe (Pdf)

One of the important things in CES ringing is the ratio Adults:Juveniles. If you want to produce data for this ratio, you have to have knowledge about the plumages of the different age classes. Sometimes it's very obvious a bird is a juvenile: There are bird species that have a juvenile plumage which is completely different from their adult plumage. For example the well known Robin Erithacus rubecula: On the picture below you'll see a juvenile bird on the left and on the right an adult bird. The juvenile looks completely different, doesn't it? You could hardly believe that the spotted brown bird grows into a brightly coloured individual. The Pictures are taken at "Vogelringstation Meijendel" in the dunes of Wassenaar.

In those cases it's easy to tell the age, but you have to know how the juveniles look like, otherwise you might think you're dealing with a complety different or even unknown species.

There are also cases in which it isn't that easy to tell the age and you have to look for more subtle differences. Sometimes it might even be possible that those subtle differences don't exist and you have to do without an age classification. Some feathers (or all, depending on the species) get moulted during the season. When feathers are moulted, it might be more difficult to age the birds. Have a look at the Winter Wren Troglodytes troglodytes: On the left you see a juvenile bird, which lacks the white tips of the undertail feathers. On the right you see a bird that was photographed in October. It shows white tips of the undertail feathers. Is it then an adult? No, sorry, you can't tell. First calenderyear birds (1cy) moult their body feathers in the end of summer (so also their undertail feathers). Once moulted, there's no difference between the undertail feathers of adults and of juveniles. 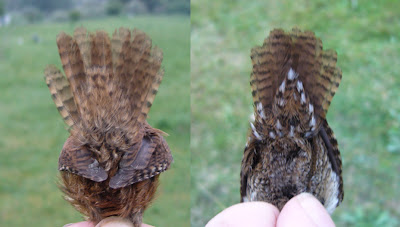 So during CES you constantly have to be alert to make the right ageing decissions. As I help as a volunteer on the Bird ringing station Meijendel, I will try to show you more often what we are doing over there and how you could age, sex or identify different birds. 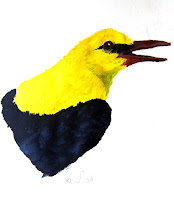 During CES, we spend quite some time around the ringing area, in the middle of a beautiful nature reserve. As a bonus for our efforts, we often get to see a lot of other nice birds, plants, mammals and amphibians. Today was really special, I got a magnificent view of two Golden Orioles (male and female) Oriolous oriolus. We heard the male calling all morning long. But getting to see them is something different. Orioles spent most of their time high up in the canopy. Deeply hidden between the leaves and branches of the trees. But if you're willing to put some time into it, there's a good possibility of seeing them. So I decided to wait and search the canopy. Then all of a sudden the male showed itself. It was singing completely free on a dead branch (I made a painting, so you get an impression of the splendor of this species). There we no leaves or branches blocking the view. It was absolutely marvellous! Then I even got to see the female. I was daydreaming of catching them on our ringing station, but off course this will never happen. Ah well... it's always good to keep something to wish!
Gepost door wouter op 12:42