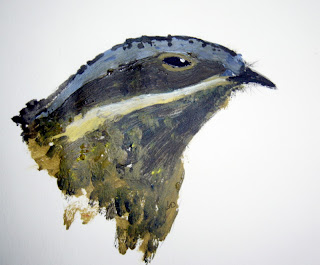 No, I'm not talking about cryptozoology. So sorry, this is not a story about the Chupacabra monster, also called the Goatsucker. Nor is it about new swearing words or strange sexual obsessions. It's about nightjars and other nocturnal birds.


The European nightjar Caprimulgus europaeus, bears in many countries a name that's related to the sucking of goats. Goatsucker, what a strange name, isn't it? Does it really suck goats? No, they prey on large insects. The name goes back to ancient Greek times and is based on folklore. Nightjars are active from dusk till dawn. The birds can sometimes be found near catle, probably because the cows and goats flush large insects, which the nightjars eat. Mysterious birds, night active and in the neighbourhood of goats... what would you think? Off course: they must be drinking the milk of the goats and make them sick.


Nightjars and the combination with the landscape in which they live, leave a mystical impression. If you go to the right places (moorland, forest clearings, heathlands) in the right time of the year (they are summer residents and migrate in winter to Africa) you might be able to find one. Numbers are increasing in the Netherlands, so your chances of seeing one will also increase. When the sun sets and night comes, you hear a churring sound*, first coming from far and flowing over the moorland. It is not monotonous, the churring changes a bit in highth and slowly you get hypnotised. It's a pleasant feeling, the temperature is warm for a night, moth are flying around you and you dream away. Then you hear a "sqeek" sound * and then a rolling and a bit gutteral "kroo...kroo..kroo". All of a sudden you're out of your dreams, the bird flies above your head. Fantastic! If you're really lucky you can also hear them clapping their wings. I'm not sure how this "kroo..kroo.. kroo" sound is produced, it might be made with the wings, you can hear it at the end of this recording: http://waarneming.nl/sound_details.php?id=902. The males have a white patch on their underwing, probably used in courtship. It is said the males strongly react on white objects. I'm not so sure about this. I still lively remember an episode of Bill Oddie goes wild, where Bill Oddie runs over the moor with his white handkerchief, without succes... We however did try the white object trick with a white shirt and it seemed to work, we got a nice view of a bird flying over our heads, so it might be worth trying! 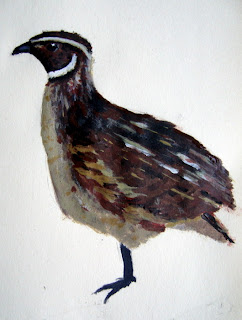 Tonight we (Ben, Reinder, Luuk and me) left for a long trip. On the programme were Common Quail Coturnix coturnix, European Nightjar Caprimulgus europaeus, Corncrake Crex crex, Baillon's crake Porzana pusilla, Spotted crake Porzana porzana, and with some luck maybe some owls. Apart from the Corncrake, we got them all. It was a nice night, and also Luuk's birthday, which we celebrated at midnight. The evening started with Common quail. When we arrived at the place where we hoped to hear them, there was no activity at all. When we gave up hope and just wanted to go, we heard a bird calling from a ryefield. We heard the "wet my lips" call *. We waited for about half an hour when we suddenly saw a bird crossing a path between a grassfield and the ryefield! My first real sighting of a quail ever. All my other birds were only on sound. That was a good start! We even saw one flying, which is a rare sight, since they are reluctant to fly. Even when they are flushed, they prefer to crawl away under the vegetation in stead of flying. They do however fly over large distances: they migrate to Africa in winter.
(I made the drawings of the nightjar and the quail, since I couldn't get pictures this night. I also don't want to take too many pictures, since you sometimes have to be careful putting too much effort in getting a picture while you should actually enjoy the birds you are watching!)

We decided to go on and searched for a good spot for nightjars. We didn't have an exact location, but the area looked suited. When we were waiting for the nightjars, we got a magnificent sighting of a hunting Long-eared Owl Asio otus. I had never seen a Long-eared owl like this, in the back we heard it's young calling. A couple of hundred calling Natterjacks Bufo calamita (toads), blurred the first nightjar. Then when we walked on, we heard the nightjar better and got to see it. Beautiful birds with their strange jarring sound (they get their common name from this jarring in the night), their long wings and tail and their rather slow flight. There were at least two birds calling at this location.

We left the area and headed for the Baillon's crakes. Luuk and Ben hadn't been there this year, for me and Rein it was the second time this week. But it was Luuk's birthday so we didn't care. We tried a Corncrake but weren't succesfull. Tired, but still hungry for more species, we got a nice Little owl and ended the night with a Spotted crake (we heard it's call, which sounds like a whip). Birding by night, fantastic experiences, but it's a shame you always get so tired of these fanatic tours.

* The churring, the "Squeek" and the "wet my lips" soundrecordings can be found on Latvian Birding: http://www.putni.lv/index_balsis_eng.htm
Gepost door wouter op 15:27