Do it yourself Lesser yellowlegs 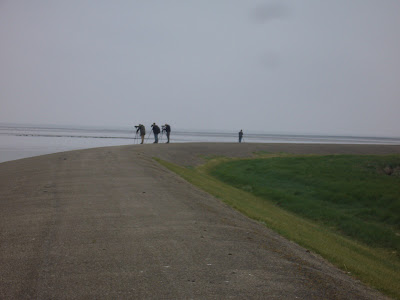 Yesterday we participated in a Birdrace. The whole idea of this Birdrace was to combine a Big Day with casual birding. It's the combination of both that make things interesting. We discovered a nice surprise on this event. (The picture above shows my four friends (Luuk, Frank, Ben and Sjaak) with whom I participated)

On a normal Big Day you start with a team and you get as many birdspecies as possible in a fixed area within 24 hours (period can be shorter but has to be within a calender day, so from midnight to midnight). The area could be a province, a municipality, a place where you often go birding, a country or whatever geographical borders you and your friends like to set. The rules themselves are not that important, but it's important everybody who participates, plays according the same rules. Most of the important rules are about:

To get an idea of these rules, read the rules of the American Birding Association:
http://www.stanislausbirds.org/Events/big-day-rules.htm

Many birdwatchers in the Netherlands don't like this way of birding. They probably think it's much to stressfull and overdone. Often it is hard to get enough people who want to join you on such a day. The Birdrace we participated was however different from normal Big Days. The most important thing (apart from just having fun) was to realise a big specieslist. Not for individual teams but for the total of all the teams. There were prizes for the best discovery of the day ánd for the team with the longest species list. So therefore teams could chose wheter they would come for quality or numbers, or off course both. Actually there were no rules, apart from time and area. The area (provinces of Friesland, Groningen and Drenthe) was an area where we were not really familar with. That is, we didn't know every exact location of commoner species. It is clear we could therefore probably never win a normal Big Day in this region without days of extensive pre-research. We didn't put effort in pre-research, since we just wanted to join for the fun of it. And because we already wanted to go to the area and because we liked to contribute to the total list, we subscribed ourselves.

Our real idea behind this subscription was off course, to profit from the succes of other birdwatchers ;-) About 50 good birdwatchers joined and it was only waiting for something good to show up. We decided to take it easy and look for some stuff around the Lauwersmeer. We didn't receive any phonecall from the organisers of the race. What was going on, no rarities? We phoned Martijn Bot, but he was also surprised that nothing really good had been seen. Apparently it was up to ourselves whether we would see something good that day. Things were not really bad, we had seen a White-tailed eagle Haliaeetus albicilla, a brown variety female Cuckoo, heard a Eurasian Golden Oriole and seen some other nice birds, but we were a bit disappointed by the low numbers of waders. When we arrived in the Ezumakeeg (probably the best place in the Netherlands for waders), things were looking bad. The birds where we had hoped for (Broad-billed Sandpiper, Black-winged Stilt, Red-necked Phalarope) were all gone. Then we got a telephone call by an other team. They discovered a Little Bittern Ixobrychus minutus. Before we would go to there, we decided to finish our check of the Ezumakeeg first. 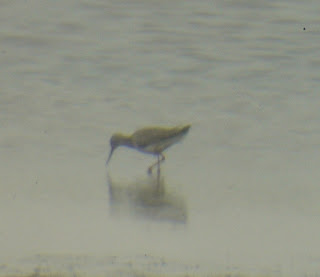 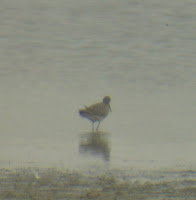 What a fantastic decision! Only a few minutes later we discovered a Yank! An american wader: the Lesser Yellowlegs Tringa flavipes. It was Frank van Duivenvoorde who found the bird first. He first thought it was a Marsh Sandpiper Tringa stagnatilis but things weren't right. Then the bird flew a few metres, and things were getting clear. About the size of a Redshank, but much more slender. The bill was fine, the neck gracious and the bird looked longer. The legs were yellow to yellowish orange. But most important, there was no sign of a white triangular rump patch. There was only a square white patch, like in Wood Sandpiper Tringa glareola. It was flying towards us and landed at about 30 metres away from us. Luuk, put the sighting on the pagersystem and I called the co-ordinator of the Birdrace, so that everone was aware of this rarity. Then within a few minutes, it flew off to another place where it was later rediscovered by some other birdwatchers at far greater distance. We were really lucky, to get such magnificant views.
See better pictures from Sjaak and Luuk here:

We won the prize for the best discovery and got a lot of congratulations (and the total of all the teams together was 181 species!). It made birding that day a lot more relaxed. We scanned some other places and then returned to the Ezumakeeg to have a last look at the Lesser Yellowlegs. At the north part of the Ezumakeeg, where we discovered the Lesser Yellowlegs, were some Ruffs displaying. Before leaving we enjoyed their magnificant plumages and beheaviour, then we went home. Satisfied after a good day of birding! 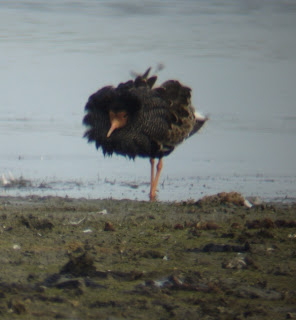