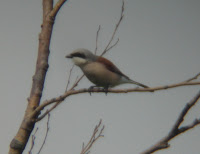 The Red-backed Shrike Lanius collurio looks so sweet and harmless, but behind their mask these birds are ferocious killers! They eat large insects, small reptiles, small mammals and young birds. You wonder where the colloquial name "Nine Killer" comes from? This is an old folk name, it was thought that the Red-backed Shrike killed nine prey before eating them. Shrikes have a habit of impaling their prey on branches or barb wire. They don't eat everything immediately and that's where the story originates; that they kill nine animals before starting to eat them. It's remarkeble that this bird got this name in several countries (German: "Neuntöter", Dutch: "Negendoder"), so you almost start to wonder whether there's some thruth in the name. There's no other bird family in Western-Europa that impale their prey. So if you ever find impaled prey animals, you know there's a species of shrike present.

These beautiful birds were once widespread as breeding birds all over Europe. Nowadays numbers are declining, especially in north-west Europe. In the UK there's hardly any breeding birds left. In the Netherlands the species also declines, but there are also some new colonisations. The species needs the old European structure rich landscape, with small waste lands, scrub areas and hedges, which was rich on insects. These types of landscapes vanish and so do the birds that depend on them. Birds like Ortolan Bunting, Corn Bunting, Whinchat (see picture), Little Owl and Red-backed shrike are all declining in the Netherlands or are already extinct as breeding birds. There's some hope however. Some of these area's are restored as cultural and natural historic areas. Global warming might also help, the species have their strongholds in the southernparts of Europe, maybe if temperature will increase this will give good opportunities for these species to return.


Today, I got a telephone call by Jaap. He discovered a Red-backed shrike in an area called Lentevreugd. I couldn't come immediately, but called some friends to tell them the good news. A Red-backed Shrike is a rarity nowadays in the province of Zuid-Holland and even if it wasn't, you could still never get enough of shrikes, they are simply beautiful! When I arrived later in the afternoon, the bird was still present. It was a beautiful male in full colours with it's grey head and the black mask throug it's eye. He had a beautiful pink breast and a very nice chestnut coloured back. Red-backed Shrikes migrate in winter through south-east Europe into East Africa, on the way back, they take the same route. This bird just arrived (probably it was still migrating) and was wearing a metal ring. The ring looked rather large and new and it was a shame we couldn't read the inscription, since it didn't look like a Dutch ring. I had great views of the shrike, which was catching insects and was even singing! At a certain moment I even saw it regurgitating a pellet of indigestible insect parts. 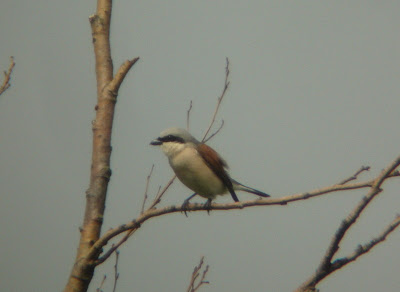