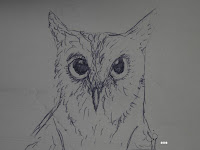 It was 11.00 p.m. when I got the first telephone call, I didn't even noticed it. The second and third call came by 11.15 p.m. The calls were made by two brothers and great friends. I wasn't very disturbed since they are able to call me for almost any small thing in the middle of the night. Probably a mouse, or a young Tawny owl or maybe they were playing some kind of practical joke on me... I was tired and decided to call them back tomorrow. Then, when I got the fourth call by another birder (Rein), I knew things were serious. When I picked up the phone he told me there was a European Scops owl calling at only 10 kilometres from my home! Amazing, but was it really this species? And how did I get there?

I was suspicious: two years ago some of my friends made the classical mistake in identifying nocturnal nature sounds. They mistakenly took the sound of a Midwife toad Alytes obstetricans for an European Scops Owl. How could you mistaken the sound of an owl with that of a toad, I hear you think? Well, the sounds are very similar and I must admit there were also some extenuating circumstances:
-When they heard the sound, they just returned from a long night of birdwatching and were very tired,
-they weren't aware of a feral population of Midwife toads which was close to the location of the discovered sound, no excuse off course ;-)
-There were a couple of toads present. This made the sound look as if it was moving: One toad could be calling for a few minutes, fell quiet and another toad 10 meters away would start calling.
-They saw something flying (whatever it was, it probably wasn't a scops owl...) 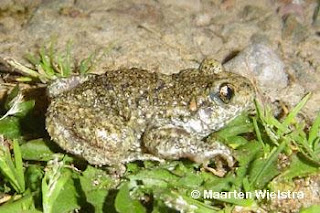 The sighting fooled experienced Dutch birdwatchers, even people who had experience with both species (toad and owl) abroad, so be aware! The next day, the truth was revealed, when we arrived, we saw a nice midwife toad walking through the grass in the sandy dune, although it wasn't a Scops owl, I liked it anyway since I had never seen an adult Midwife toad before. I've heard (I'm not sure whether it is just rumours or whether it is really true), that there are apparently even Birdsound cd's with recordings of Midwife toads in stead of the Scops owl (the species they claim to have recorded), so even learning from cd's might give you the wrong ID. The picture is from that second day, photographer is Maarten Wielstra. If you want to learn more about confusingly similar animal sounds, read this interesting article:
Insect, Amphibian or Bird? British bird, 77, No. 3, March 1984
(link will only work for a week, after that period, you have to search for it in a library or subscribe to British Birds)

So what about this new sighting? News spread quickly and within a few minutes transport was arranged. I got another phone call, a sleepy voice at the other end of the line: "Hi, they called me out of bed, I'm putting on my clothes now and I'll be at your place as soon as possible. It was hard to explain to my girlfriend, she'll probably never understand it, but I was able to get her car anyway. Be ready!"
Then another phone call of a friend (Maarten) who was already at the spot: "Wouter, it's the real thing!!" he said. I could even hear the bird calling through the telephone. When we arrived, there were about 30 people present. Mainly local birdwatchers. It looked ridiculous: 30 people, mainly men, staring with their binoculars in the dark, talking with lowered voices and pointing with their microphones to a ...tree...
No pictures this time, but this is what we heard:
http://waarneming.nl/sound_details.php?id=850
A fantastic scops owl! Apparently the bird was already present since the 12th of May. Residents heard already for a couple of days some kind of alarm... So it's not only Midwife toads that can be confusing.

The next day there were a little more people than the 30 I described above... About 300 (!) people came to visit the Scops Owl: 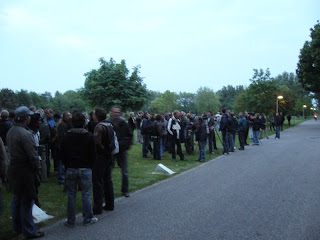 The European Scops Owl breeds in Southern Europe, North Africa and parts of Asia. In the Netherlands there are about 7 previous records of which 3 were found dead and 2 were caught. This was only the second twitchable bird for the Netherlands, the last twitchable bird was already ten years ago, so it is still a true vagrant. However it is a species that's supposed to benefit from Global warming and it is thought to expand it's breeding territory northwards. So maybe we can expect this species more often in the oncoming years.
Gepost door wouter op 02:42