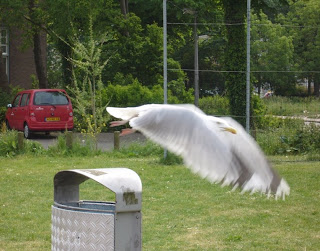 Eradicate them! Kill their young! Get rid of them, this is not natural! I can't sleep! They are dangerous! All different kinds of reactions I've heard on the Large gulls breeding in our town. These comments look a bit overdone, but the gulls do cause problems. Even I have cursed a Herring Gull, that smudged my new suite. I can still lively remember the embarrassing moment. I could throw away the pantalon...

No, these gulls weren't always there. As a matter of fact they arrived only recently. Most gulls probably originated from a nearby gull colony. This colony was situated in Meijendel, a dune area north of The Hague. The colony got some fame through the experiments and observations made by Nobelprize winner and biologist Niko Tinbergen. His book "The Herring Gull's World" from 1953 is mainly based on observations made in this colony. The colony thrived untill the end of the eighties. By that time, 1986 to be precise, something changed in the dunes: we experienced the return of the fox (it's not really clear wheter the foxes were illegally introduced or wheter they arrived naturally, but they were there). It had a major impact on many animals in the open dune area. The gulls experienced a lot of predation and disturbance and then they moved. They fled to other large colonies, but some of them adopted a new breeding strategy, they started breeding on flat roofs. It looks strange, but maybe the gulls saw the buildings as some sort of cliffs.

It was a perfect situation for the gulls. Predation numbers were low in the city and food was close. The population grew and so did the problems. Apart from the fact that Dutch people always have to complain about something, there is, I think, at least one really serious problem and that's sleep deprivation. The gulls make a lot of noice, even by night and keep people awake. The local government tried everything to diminish the problems but untill now they weren't succesfull.

In our city you can find Lesser black-backed gulls and Herring gulls breeding. Some Common Gulls might also be breeding but I haven't seen them here. Common terns are also known to breed on rooftops and there's a breeding colony not far away.

Why would I write about dull gulls? Because the gulls aren't that dull. I enjoy watching them when I'm working and this year I was them very thankfull. Their alarmcalls resulted in a sighting of an Osprey and a sighting of a Black Kite, both scarce in the Netherlands during migration. So even if you don't like gulls, keep an eye on them!
Gepost door wouter op 05:51