In Dutch language we have a language construction that makes it possible to make a size distinction in a noun. For example there is "huis" (house) and "huisje" (small house). In English you use most of the time an adjective, but in Dutch this isn't always neccesary, you can often use the "-je" or "-tje" extension (there are exceptions in English, mostly in childlanguage with words like doggy and kitty, but it's also commonly used in English dialects). This construction (it's called a diminutive) was also used in many Dutch bird names. Apart from giving a size impression, it also makes a word sound nicer or friendlier. All different kinds of names were used to refer to one and the same birdspecies, this was confusing. In an attempt to standardize the Dutch birdnames the sector Environment of the "Centraal bureau voor Statistiek (CBS)" published a list of official Dutch names:
"Van Duuren L., Van IJzendoorn E.J., & Osieck E.R., 1994. Nederlandse naamlijst van Holarctische vogels. Centraal Bureau voor de Statistiek. Voorburg/ Heerlen."

The list was based on te usage of the names. The ones that were used most often were the ones that got an official place on the list. They kept the diminutive for a lot of birds. This lead to a lot of criticism, since it wasn't clear why you should use "-je" with one bird and not with the other. The critics claimed that "-je"and "-tje" extensions were merely based on affection for a bird rather than on actual size differences. They wanted to have the same rules for all the bird names and argued that the "-je"and "-tje" names should not be used. A few of these critics were translators of influential birdguides like the Johnsson and the Svensson and therefore their ideas and names were quickly adopted by a lot of people and institutions. However a few of their alterations just didn't sound right (or might never have been used before) and therefore they changed a few names back to the old situation. One of the names that was changed back was "Paapje" or Whinchat in English.

I think we should use the diminutives more often. What's wrong with affection? Some birds just happen to cause more excitement with me than others and often it are the ones that have the diminutives. Be honest, wouldn't you like to see a smew (Nonnetje) over a Red-breasted Merganser (Middelste Zaagbek)? Or a Jack Snipe (Bokje) over a Common Snipe (Watersnip)? And isn't a Wren (winterkoninkje) just a lovely creature? So is the Whinchat. For some reason I prefer seeing them over their closest relatives the Northern Wheatear and the European Stonechat, although they are lovely as well. "Paapje", it just sounds right! 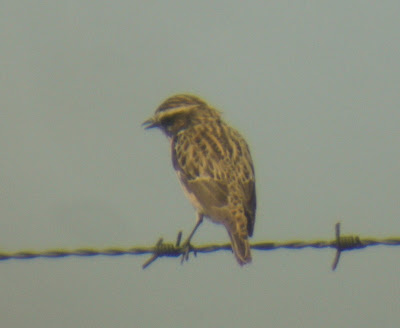 Today I saw a singing male Whinchat somewhere in the province of Zuid-Holland. That's a rare place to see singing males. Once they were quite common breeders in the dunes but nowadays they hardly breed in this part of the Netherlands. Numbers went down dramatically in the Netherlands. Probably this was also not a breeding bird, but a migrating male. Whinchats can be hard to monitor. Some birds can still be migrating when other Whinchats are already breeding. Sometimes they sing when they rest during migration. Therefore one sighting of a singing male isn't enough for a breeding record. In the Netherlands it is nowadays a very scarce breeding bird, mainly in the eastern parts of our country. I was very pleased with this sighting since it was my first sighting of a singing male ever.
More about the diminutives in birdnames can be found here (only in Dutch):
http://home.wxs.nl/~hwdenie/vogelnamen.pdf