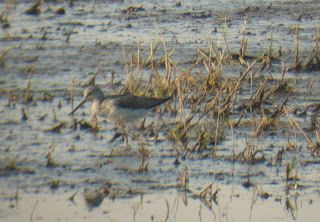 The waderplace I described here yesterday, becomes better and better! Last night I got a telephone call by a birderfriend, who told me numbers had increased and that there were some new species as well. I had suggested him (I even might have been a little pushy.. ) to visit the place. He called me in surprise. New species for the area that Bas discovered were Pied Avocet Recurvirostra avosetta and Common Ringed Plover Charadrius hiaticula. Not real rarities, but nevertheless nice ones. Bas also saw a male Garganey Anas querquedula. One of our most beautiful ducks in Europe, and quite scarce.

These new discoveries were reason enough for me to visit the place again. With migrating birds you never know what to expect. Birds can stay for a couple of days or be gone in a few minutes. If you want to see something good, you should check good locations regularly. The inundated fields aparantly worked as a magnet for waders, so this was a potential good spot to find a rarity.
I didn't find any, but I enjoyed my stay. Numbers were high and birds were close. I got some splendid views. Taking pictures was a little harder. 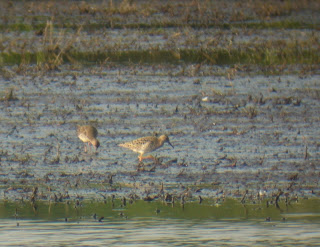 Really special was the emergence of thousands of Mayflies. They were everywhere, crawling up my tripod, my throusers, my bag. We saw the emergence from their last larval instar to adulthood. For some species of Mayflies this only happens on one or two days in a year and the insects live very short maybe only as short as a few hours. This makes it even more special! 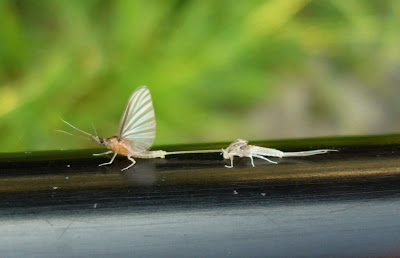