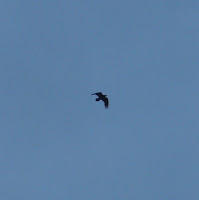 The Raven Corvus corax plays an important role in our West-European Mythology and in our fables and storytelling. The two Ravens Huginn (Thought) and Muninn (Memory) for instance were the messengers of the North Germanic God Odin. They roamed the world by daylight and reported the God by night. There are also numerous stories and fables about ravens. One very well known is The raven and the fox by Jean de la Fontaine. In this fable the raven is portraited as a dumb bird of which we should know that it's song is not so nice. But in reality Ravens are very intelligent birds. They belong to the most intelligent birds in the world. Besides their intelligence they can be very vocal, and make all sorts of sounds.


Although Ravens are smart and adapted to eat all kinds of food, they were driven to extinction in the Netherlands. They had a bad name and were thought to bring bad luck. Therefore Ravens were shot, poisoned and their eggs were destroyed. By 1940 we lost them as breeding birds. A couple of unseccesful re-introduction programmes were started, and only in the 60's one of the programmes was succesful. Ravens were starting to breed again in the Veluwe (a major forest and moorland in the center of our country). But in the beginning things went slow. By now, they seem to be able to maintain their population and they start to expand their distribution. 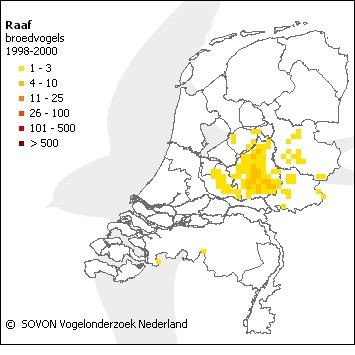 This is a map with breeding territories in the Netherlands in 1998 - 2000. The map was created by SOVON: http://www.sovon.nl/ a non-governmental organization concerned with bird counts and research in the Netherlands. 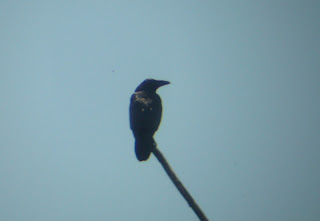 Ravens are fantastic birds. In Holland they breed in quiet places and can be illusive. I was very fortunate to see a breeding pair with their young this weekend. The young birds had just fledged and were flying around with their parents. They were calling each other and sometimes they landed in the trees above me. Unfortunately I didn't bring my scope. So I had to "digibin" some pictures. Pictures are of a flying parent and a resting young. 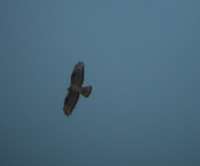 The forest in which the Ravens were breeding was also good for some other nice species. I saw Common Redstart Phoenicurus phoenicurus, Pied Flycatcher Ficedula hypoleuca, Spotted Flycatcher Muscicapa striata. But best of all was a European Honey Buzzard Pernis apivorus peforming a butterfly flight right above my head!

I always liked the television series "the Storyteller" by Jim Henson. One of the stories is called the three ravens. It's a nice old folklore story and it would have been a nice addition to this message. I found it on Youtube, but it has been removed, so I can't give you a link.
Gepost door wouter op 02:12