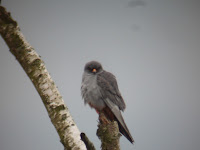 There's an invasion going on of Red-footed Falcons Falco vespertinus in the Netherlands. It started three weeks ago when the first rumours of Red-footed Falcons migrating north came from Spain and France. A few days later, the first falcons were reported on migration points in the Netherlands. Numbers and sightings increased and then the first reports of present falcons came in. Every year in spring we have a few sightings of Red-footed falcons, but normally they remain rare. This year however, the winds were good (we had a long period of eastern winds) and the falcons were probably driven by the winds to Western Europe. They were seen on numerous locations and it was the first time since the last invasion of 1992 that large groups were present. 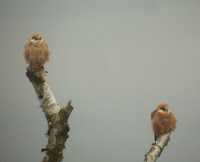 Red-footed Falcons normally live in Eastern Europe and Asia. They breed there in small colonies, mostly within colonies of a different bird, the Rook Corvus frugilegus. Of which they use old deserted nests. In winter they migrate to Africa. In spring, when they return, they can get lost, that's when they show up in Western Europe. On rare occasions, this can result in a breeding record. There are some records of breeding Red-footed falcons from Germany, Sweden and Finland. In the Netherlands it however never occured, but who knows what this invasion will bring! They are mainly insect eaters and need areas with many large insects, like dragonflies. 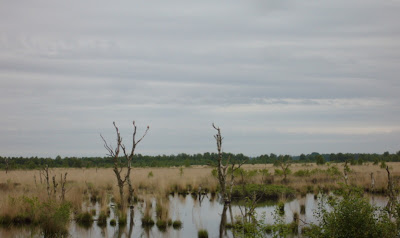 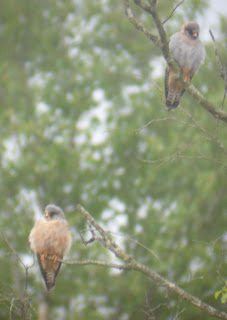 Last Saturday me and some friends went to an area called the "Fochteloër Veen". There supposed to be a group of at least 30 Red-footed Falcons present according to the nature database Waarneming.nl. When we saw the pictures, we decided we should go there. The problem was, we couldn't. First opportunity was this weekend, so we were crossing our fingers and hoped the birds would stay. And they did! What marvellous birds! I always hoped to see them and never succeeded untill this year. The first ones I ever saw, was at the migration counting point at Breskens this year, but views were bad, nothing compared to what we saw at the Fochteloër Veen area. WOW!!! When we arrived at the spot in the morning, the birds were sitting in the top of dead Birch (Betula) trees. We counted at least 31 but it might also have been 34. I won't bore you with the details about this ambiguity concerning the count, what's important is that there were so many birds present!


It was possible to see all the plumage variations you can find in spring. First of all, in this species the sexes are not alike (they show sexual colour dimorphism) and there were males and females present. Then there were adults and 2nd calender year birds, so different age classes. But there were also large differences within the 2nd calender year group, which was really nice to see.

We were enjoying the falcons when my friends got a pageralert, through the Dutch Bird Alert system. A Terek Sandpiper Xenus cinereus was dicovered at the Lauwersmeer area. For three of us a Terek was a lifer and a bird which was high on our whishlist and thus we decided to go. It didn't work out; we didn't see the bird. The Lauwersmeer is however one of the best birding places in the Netherlands and although we didn't see the Terek we had a good time over there. Apart from the pleasant company the birds were also pleasant. Like numerous shorebirds at close distance (male ruffs in breeding plumage, temminck stints at 3m., etc etc.), 2 nice Whiskered Terns Chlidonias hybrida, 6 Black Tern Chlidonias niger, one Osprey, one Caspian tern Hydroprogne caspia and loads of other birds. On the way back we saw in Groningen two White-winged Tern Chlidonias leucopterus (which completed the three marshterns you can see in Europe) and then we went back to the Fochteloër Veen to have a last look at the Red-footed falcons.

The falcons were even better than in the morning, catching insects (mainly dragonflies). Sometimes I saw them jumping into small trees or on the ground. It was colder than the days before and most dragonflies were inactive, so they had to grab them from the trees and bushes. They were flying right in front of us and weren't afraid at all, I even saw them hover! Splendid!!
Gepost door wouter op 01:20