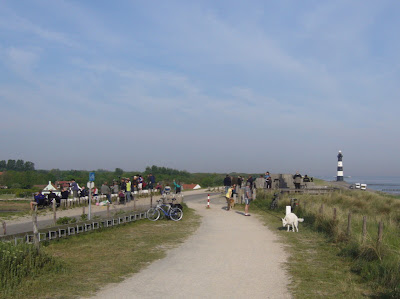 Breskens is the best place in the Netherlands to view migrating birds in spring. On days when the winds are good (East/ South-east, 4 Beaufort scale) and the temperature is nice, birds pass in impressive numbers. The best time is the last two weeks of April en the first two weeks of May. This year the winds were extremely good and it rained rarities. Also commoner birds like swallows, swifts and meadow pipits were seen in high amounts and more than 100 species were observed while migrating every single day! That's why Frank and I decided to have another try at the Breskens migration point (it was our 4th time this year). Our main goal was to get a good view of red-footed falcons. Normally Red-footed falcons are quite rare in the Netherlands but occasionally they can show up in larger numbers. There seemed to be a small invasion going on and they were reported from many places in the Netherlands.

After a 2,5 hour drive, Frank and I arrived in Breskens. There were not as many birders as the days before (on good days there can be more than 150 people, today there were not many more than 50) and there were not many birds either. We got some really good species, but views were bad and numbers low. And although we got the Red-footed falcons we didn't go home completely satisfied. Maybe we got spoiled by al the good stuff we got the week before, or maybe we were a little jealous on our friends who decided to try their luck at other places (and were more succesfull), who knows....

Candy of the day (translated directly from Dutch and probably not a proper English expression, but I like it anyway) was a Cattle egret in summer plumage in an area called "De Braakman". Frank got the sighting through his pager and since it was on the way back we decided to have a go at it. It's discoverers were still present and they pointed the bird to us. Otherwise it might have been quite difficult because the bird sometimes vanished into some pine trees which appeared to be a new Grey heron, Little egret and Spoonbill breeding colony! It collected sticks and small branches and apparently was building a nest. Wheter it was paired or not, we couldn't tell. We saw only one bird. Nevertheless a nice sighting. Also my first Cattle egret in breeding plumage in the Netherlands.

You can find the total results of the counts of today on the migration database Trektellen.nl , but don't forget to change the date to the 10th of May.
Gepost door wouter op 12:42