The Fochteloerveen is a special type of peatbog, called "hoogveen" in Dutch or raised bog in English. It's the final stage of a vegetation succession. Succesion starts with a pond or lake, waterplants die and the pond gets filled by layers of dead leaf material. Under water oxygen levels are very low and therefore the plantdebri hardly decays. Slowly the pond gets filled completely by non-decaying dead plant material. When the pond is filled, slowly a forest can devellop. But even the forest will not be the final stage. Rainwater is the only source of water, which is low on nutrients and it has a relative low PH (it's a bit acid). Nutrients will be washed away and acidity will increase. A lot of plants and trees can't cope with this and die. In the end, you get a very special vegetation of all kinds of rare plants and peat moss Sphagnum. Peat moss can grow continuously. It dies at the bottom and grows at the top. It forms a kind of lens and the area gets a bit uplifted. That's why it's called raised bog. 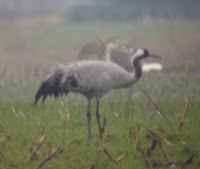 In the past, large area's of the east part of the Netherlands were covered with this "hoogveen" habitat type. But in the past centuries most area's were destroyed for turf collecting. Now only a few relatively small area's remain, of which the Fochteloërveen is one. There is hardly any turfcollecting left and the area could be retained as an important nature conservation area. You can find here very rare animals and plants. Nowadays waterlevels are being kept high artificially and some other restoration is taking place. The Fochteloerveen restoration is a successtory. Amphibian and reptile numbers are high, numbers of dragonflies are impressive, rare plants are doing well and rare bird species returned or discovered the area. The best succes so far, was the return of breeding Common Cranes Grus grus. (The picture of the crane) isn't from today. The Fochteloereveen becomes one of the most important area's for species that are declining in the rest of the Netherlands.

Our return to this beautiful area wasn't a successtory, though. We wanted to have another look at the group of Red-footed falcons, but they were gone. The last birds left the day before... We couldn't find the reported Red-backed Shrikes, and a possible sighting of a Short-toed eagle was far from satisfying. Things got even worse when friends (Ben and "lucky"Luuk) discovered a red-throated pipit in a different part of the Netherlands. When we started the day there was some sort of funny competition between our two cars, who would find the best birds and the most species and it seemed as if we were the losing today. But although we "lost", we did see some good stuff like European Honey Buzzard, loads of Hobbies, two Red-necked Grebes (in Diependal) and two displaying Common Snipes. To see displaying Common Snipes is a rare thing nowadays and we were very happy with the sighting.

Because there were not as many rare birds as we had hoped for, we had to do with other stuff, like these two species of carnivorous plants: 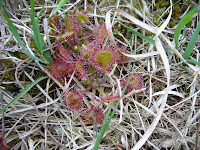 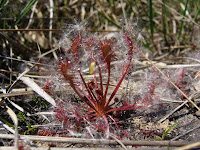 
Even though things were not really succesfull today, the Fochteloerveen remains a beautiful place. So I can only say:
I'll be back!!!
Gepost door wouter op 05:52