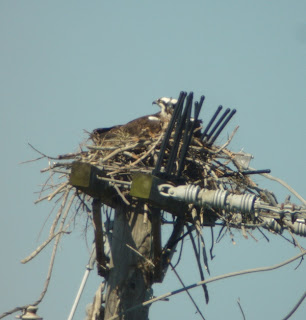 An overflying Osprey! Thanks again to the gulls (Herring and Lesser black-backed) in my town! As I wrote before, gulls can be very helpfull in finding birds of prey. They make a lot of fuss when danger flies above their heads. Most of the time, they'll find the raptors sooner than you. So keeping an eye on them, would be a good idea. Today, all of a sudden there were alarming gulls everywhere. I realised there was something going on and when I looked out of my window I saw the cause: a soaring Osprey. Nice! Already the second I found this way this year.


Ospreys can be found almost everywhere on our globe, except Antarctica. They belong to the most widely distributed birds in the world. However they don't breed in the Netherlands! And no-one knows exactly why. The picture of the breeding Osprey is a picture I took in Florida in the USA. There are 4 subspecies in the world. In Europe we have Pandion haliaetus haliaetus and in Florida you have a different subspecies Pandion haliaetus carolinensis, but I couldn't find many differences with our own Osprey. In Florida they were breeding everywhere, so why not in Holland? Conditions in the Netherlands seem perfect, with our lakes, marshes, fish rich area's, but they are not here. We had some birds staying in Summer and a few breeding attempts in recent years but they were not succesful. I think reasons might be historic: Ospreys were hunted severely for ages and their eggs were collected (mainly in Great Brittain). Another serious reason for their historic decline was the use of some chemicals, like DDT. Ospreys are at the top of the food piramide and at the top the concentrations of persistent chemicals are higher. The top predators store most of the stuff their preys already stored and therefore accumulate much more than other animals. DDT caused serious problems with many kinds of birds. One of the main problems was the thinning of the eggshells and the toxicity to embryos. Some birdspecies were on the brink of extinction. Then by 1972 DDT was banned for agricultural use (however in some countries it is still being used). After DDT was banned, populations of birds of prey slowly recovered (but up to now concentrations can still be traced in the eggs of birds). The population of Ospreys also recovered from the DDT catastrophe and other pollutants and nowadays they are also much better legally protected, so hunting pressure went down enormously. That's why numbers are increasing, but expansion of their breeding distribution apparently goes slowly. Because there are no breeding pairs close to the Netherlands, it probably takes some time before they will establish here. At least that's what I think.

So for now, we have to do with migrating birds. And who knows, maybe in a couple of years we will also have a few of these magnificent birds breeding over here.
Gepost door wouter op 06:19